In the Middle of Studio City, Sits the CBS Studio Center 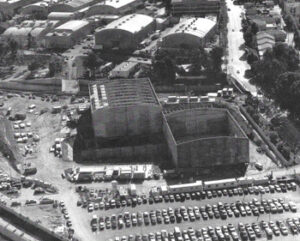 Mack Sennett, “The King of Comedy” came to the San Fernando Valley in 1928, where he build a modern movie factory that gave the surrounding area a name- “Studio City.” The Keystone Cops started a whole new school of comedy at the studio.

The Studio consisted of a two-story office building, a one-story projection room/ film editing building, a one-story film library, two-story dressing rooms adjoining one large sound stage, one-story wardrobe building, garage building, and a stage building with a swimming pool beneath the floor. While a couple of these original buildings are still standing, most of them have been demolished through the years to provide up-to-date facilities. With the coming of sound in 1929, Sennett produced some ten singing short subject films with a young unknown man named Bing Crosby. In 1933, the Mack Sennett studio went into bankruptcy and Mascot Pictures became one of its principle tenants and for the next two years, the Studio was known as Mascot Studios. The Saturdays Matinee thrillers, called “serials,” where the heroine was always left tied to the railroad tracks as the speeding train come hurtling toward her… interrupted by “CONTINUED NEXT WEEK”… were produced by Mascot. 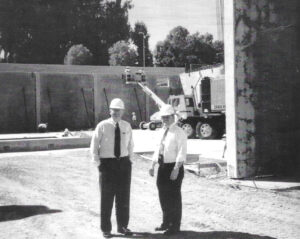 In 1935 when Herbert J Yates, wonder of Consolidated Film Industries, and the American Record Company, Mascot Pictures, and Monogram pictures joined with several independent producers to form Republic Pictures Corporation, a new name appeared over the main gate on Radford Avenue REPUBLIC STUDIOS. Although Western pictures were considered dead at the box office, Mr. Yates added romance and son to bring adults into the movie houses. He found his cowboy singer recording for his own company (American) and a new start was born… Gene Autry. In 1937 Republic Studios was comprised of six sound stages, one office building, one small mill, one small building for payroll and casting, and a small transportation building.

In 1950 there were twenty-three sound stages, six office buildings, two dubbing and scoring stages, one large mill building (including paint and miniature departments), scene docks, blacksmith, grip plaster, electric generate plant and permanent exterior streets. Republic had probably the largest scoring studio in the world. Some of the stars who have worked at Republic include John Wayne, Barbra Stanwych, Roy Rogers, Joan Crawford, and many others.

With the advent of television in the early 50’s Republic entered this new medium and produced a number of series designed for television. One of the first television awards was granted to “Stories of the Century: series which was produced by Studio City Television, a subsidiary of Republic Pictures. In 1963 the CBS Television Network entered into an agreement with Republic Studios whereby CBS would become the major lessee of the Studio. On May 1, 1963, the CBS Television Network took over the Republic Studios on a five year wall-to-wall lease and renamed the facility CBS Studio Center. CBS purchased the studio in April 1967. They constructed four new sound stages, completed modernization of all sound equipment and post production facilities, a large up-to-date transportation center, installation of a modern cafeteria, and a new main entrance. In 1969 a four-story office building (with four ground floor projection rooms) was completed. With the decreases in production of theatrical movies, the Studio looked to independent producers to fill their stages. One of these companies was MTM Enterprises who chose to bring their MARY TYLER MORE SHOW to Studio Center. This show filmed in front of a live audience eon Stage #2 for the next 5 seasons. They also produced THE BOB NEWHART SHOW, PHONDA, PHYLLIS, TONY RANDALL, and THE BETTTY WHITE SHOW. 1977 saw the final episode of a new series, LOU GRANT. MTM moved into the ’80’s with THE WHITE SHADOW and WKRP IN CINCINNATI. 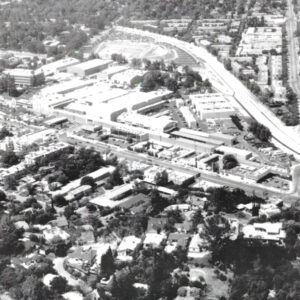 HAWAII FIVE-0 was mounted from the Studio and other shows produced included: GILLIGAN’S ISLAND, filmed at the lagoon, BIG VALLEY, WILD Wild West, amount others. In July of 1982 CBS and 20th Century Fox Film Corp. formed a joint venture which included ownership and operation of Studio Center. For the first time in almost 20 years, a new name appeared on the sign above the main gate- CBS/ FOX STUDIOS.

MTM remains the major tenant, producing such shows as HILL STREET BLUES, ST. ELSEWHERE and REMINGTON STEELE. In December 1984, 20th Century Fox sold its interest in the Studio to MTM Enterprises and on the 2nd January 1985 the CBS/ MTM STUDIOS sign went up at the Main Gate. Since that time some of the shows produced at the Studio includeL NEWHART, thirtysomethibng, ROSEANNE, A DIFFERENT WORLD, EVENING SGADE, TWILIGHT ZONE, and full length features including: FATHER OF THE BRIDE and THE ADDAMS FAMILY.

On March 17, 1992, when CBS acquired MTM’s interest in the Studio, once again the sign CBS STUDIO CENTER went up over the main gate. Since that time, the Studio has been home to several series: GRACE UNDER FIRE, DAVE’S WORLD, LARRY SANDERS SHOW, CYBILL, SEINFELD, AMERICAN GLADIATORS, etc. and feature film I LOVE TROUBLE, MR. WRONG, BOYS ON THE SIDE, and HOUSE ARREST.

On May 1, 1995, construction began on the North lot of the first of three phases of expansion. Plan I consists of two 18,000 square foot stages, both with a 35 foot grid and 150 tons HVAC, one 25,000 square foot stage with a 45 foot grid and 200 tons of HVAC, a support building on four floors consisting of offices and dressing rooms, and a bridge over the Los Angeles River connecting the main Studio lot to the North lot. Construction should be completed by the end of March, 1996.